My cousin Nancy & her husband picked us up for a tour of Jefferson, TX prior to a scheduled cruise on Caddo Lake.  She has always loved Jefferson & we had never been there.  Unfortunately it was a cloudy day with some drizzles, so rather than walk around, we just took a slow drive to view the stately homes & beautifully landscaped yards.  It is quite impressive.  They occasionally open up the homes for tours (like around the holidays or when the azeleas are blooming), but nothing was going on this afternoon.  Several of the homes are now B&B's too.  Jefferson has a historic history as a thriving port city from the 1800's.

Ate a late lunch at McGarity's Saloon in Jefferson.  It was awesome!  George & I had Shepard's Pie & it was served in a ceramic dish with a brown mash potato crust over a lusciously delicious filling of ground meat, carrots, peas, & onions.  We cleaned the plate!  It had been a hard choice, the hamburgers were huge & looked wonderful!  Also enjoyed a Red Irish Belgium Style beer.  The decorations on all the walls were great fun & it was a lovely experience over all.

After the meal, we drove to Karnack to sign in for Capt Ron's Caddo Lake Swamp Cruise.  This was to be his last 6pm cruise for the year.  We were afraid it would be canceled due to weather, but we lucked out & the rains held off for our entire cruise!!!  Yea!!!!

We boarded the small boat right on time - 6pm & the six passengers & Captain headed out. 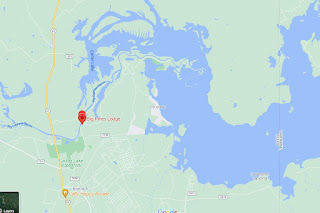 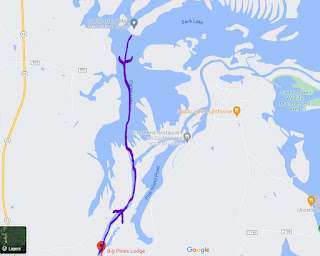 We left the dock at Big Pines Lodge & followed the Big Cypress Bayou up to an small entrance to Carter Lake.

There were several homes built along Big Cypress Bayou - some residential & some weekend rental properties.  It would be fun to rent one of the big 3 bedroom places with a deck over the water & a pontoon boat for tooling up & down the river.

Captain Ron was complaining that the water is controlled by the Corp of Engineers upriver in Texas & were currently refusing to allow any water to be released right now.  It's causing severe lowering of the water & stagnation.  The normal current is completely blocked.  The first part of the cruise was on fairly open water, but it was beginning to smell of plant residue since it was stagnant.

As we moved on into Carter Lake, there was another issue that was apparent due to the lack of current - a film from an inciduous plant was covering the surface.  Made it look dark & eerie under the cover of the huge Bald Cypress trees.  One amazing thing was that there were absolutely no mosquitos.  He was assuming that was because the Balk Cypress drops a seed pod that smells like citronella.  Not sure about that, but we were happy not to have their company.  There were a lot of small spiders & tiny hanging inch worms. 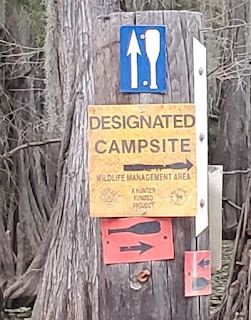 There were directions signs marking the boat lanes.  He kept assuring us that the lanes were well marked & there was no chance of getting lost.  He constantly encouraged us to come back on our own, earlier in the year when the water was flowing.  We got tickled at this one sign about Designated Camping - never saw anything that looked like a place you could camp & remain dry!!!!  The signs with arrow & oar designate a canoe lane. 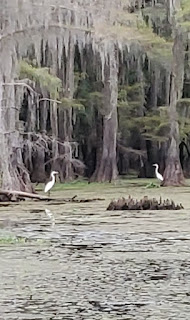 My cousin & I had hoped for more bird spotting, but we did see lots of Giant Egrets, an Osprey (he was even nice enough to sit on a branch over us for a bit & then circled over us so we could enjoy him in flight!), a King Fisher, and the hasty departure of a Wood Stork & a Pileated Woodpecker.  Not bad for a 2 hour cruise!!

He took us a bit further than he normally goes - this was his last evening cruise of the season.  We made it to the end of Carter Lake where there is a "Bridge to Nowhere."  It was apparently built in the early 1900's to access some oil drilling sites & they are no longer functional.  Access to the bridge doesn't even had a road anymore, but he says he occasionally sees a family on the bridge fishing.

The return back to the dock was uneventful, but provided us with some gorgeous sunset pictures.  It was so very quiet & peaceful out there.  It was pitch black by the time we got back & he had navigated us through the channel by flashlight!  Whew! Would love to do the cruise again in the Spring.  It certainly made for a lovely day!!!
Posted by Pam's Travel Reports! at 3:00 PM No comments:

Pam's Travel Reports!
Love to travel and love to share our adventures with others