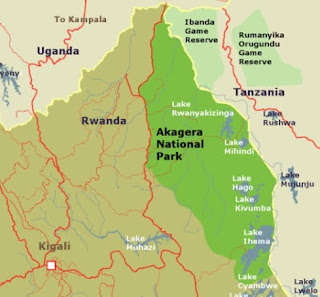 Here's a map of the park.  We started at Akagera Game Lodge near the west shore of Lake Ihema,

First we ran into a Cape Buffalo herd.  We were all excited to get the Jeep's tops up & get started spotting animals.  They had given us permission to take our shoes off & stand on the seats & we were quick to take advantage of that.  The birds were everywhere & it was hard to stay focused!  The oxpeckers were having breakfast on the buffalo.

The Spur-winged Goose that we spotted in a tree is a toxic bird.  It's main diet is blister beetles, making the meat poisonous to those trying to eat the cooked goose.


The Gray-backed Fiscal seemed to pose for us.  There we termite mounds everywhere, but there were not as large as we'd seen in other parts of Africa.  The Yellow-billed Oxpecker was in the tree rather than on the buffalo this time! 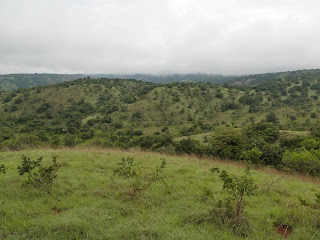 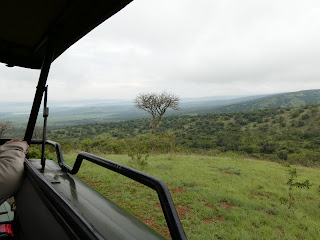 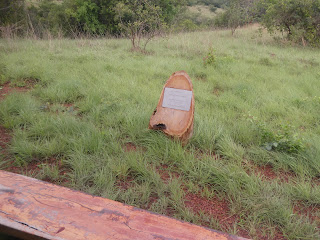 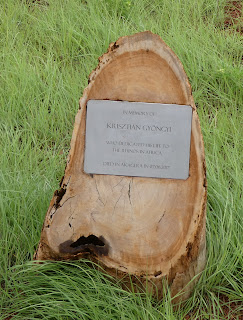 We continued on, making our way to the Lone Tree Overlook to see the monument to Kriszhon Gyongyi, a Hungarian conservationist who fought to bring back the Black Rhino to Rwanda, only to be killed by one of them.  But due to his untiring work, there are more than 20 surviving there now.  They have also reintroduced White Rhinos to the park.  The views from the peak are excellent.

We continued on the drive & came upon our first big Baboon Troop.  They were santering along the road.  We stopped & watched their antics for quite a while.  They are very amusing.


We made a short potty stop on the Ihema lake drive.  There were 2 hippos out away from the bank and numerous birds - Helmeted Guinea fowl, Both Wattled Lapwing & Water Thick Knee, Cattle Egret, African Jacana, Sacred Ibis & Hadada Ibis.  And the ever present Pied Wagtail!

Back on the road, we started north towards Hago Lake.  We found Vervet Monkeys, Impalas, more Baboons and Zebra.


At about 10:30am, we stopped for a coffee break at Lake Mihindi.  Weather was pleasant & we just couldn't believe we'd already seen so much this soon!  Their instant coffee was tasty & we got slices of banana bread that Isaac & Bachu said they had made.  Not!!!!


As we continued north, the grass was a little more lush and we started seeing a lot more Zebra, Impala, Warthogs, & Waterbuck.  Finally found a little Dung beetle.  He was having a hard time of it.  Couldn't seem to control his ball of poo.  Very sad, but we were careful not to hurt him.  Isaac & Bachu pointed out how many of the zebras have an unusual color pattern on their backs.  it is being researched as it seems to be prevalent throughout the herds in Uganda & Rwanda.  There is much speculation - in breeding?

Besides the zebra & impala, just before we got to the northernmost lake, we spotted a Tower of Giraffe.  They were imported from Kenya.  Now there are at least 80 in the park & they are striving.  They are the only giraffes in Rwanda. 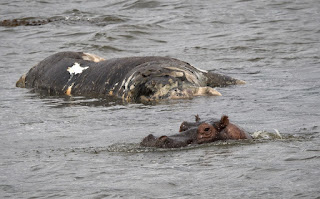 The first thing we noticed as we arrived at the water's edge was the smell!  Then we spotted the dead hippo near the shore.  It was being eaten by crocodile.  Felt like National Geographic!  Our original plan was to eat our box lunches while enjoying the wildlife around the lake, but the smell put an end to that idea.

But before we left, I got some fun birds & a Topi that was playing king of the mountain!!!  There was a Pied Kingfisher and a Malachite Kingfisher and then a Bare Faced Go Away Bird!!!  Also the Long Tailed Cormorants.  Cool Cool Cool!


Didn't take many pictures on the first hour of the drive back as we were busy eating our sack lunch!!!  But finished up the many goodies & back to looking around us!  Got some especially good close ups of a couple of Waterbucks and some really nice views of a Beautiful Fish Eagle.  More Vervet Monkeys and thank you Marilynn for the fun photo of us in the Jeep with Marlyn & Michele.


Back at the lodge for a mere hour & I took a the short walk around the electric fence perimeter by myself.  Spotted several birds, but only got pictures of the Yellow Faced Canary & the Splendid Starling.  I did id a Red Cheeked Cordonbleu!!!  He was beautiful flitting in the bushes, but too fast for me to photo!

We met back in the lobby at 4pm for an afternoon Safari.  Pat had elected not to join us - enough of the Jeep for her.  The rest of us were there, if a little blurry eyed!


Saw our regular Baboon troop just outside the fence and snapped some lovely scenery views as we headed to the NP Visitor's Center for Issac & Bachu to ask about recent sitings & determine where we should go.

Only spent about 15 minutes at the Visitor's Center.  Michele found a gorgeous silver pendant of a gorilla, but I put off buying it.  My mistake!  Never saw another like it, so missed the chance & saved some money!

Isaac must have gotten a good tip, because we almost immediately spotted 2 Rhinos.  Albeit in the distance, but easily discernable.
Ken got some awesome pictures!!  These are some of the White Rhinos that have been imported.  They are doing well & there have been some babies born here.
We continued the drive & spotted several more White Rhinos in the woods.  They were hunted & killed to extinction soon after the Genocide by farmers that were relocated here, but they began reintroducing them.  The latest was a mass relocation of 30 white rhinos from South Africa in 2021.  They are now thriving thank goodness.


We continued to spot rhinos along many other types of wildlife: zebra, lots of different antelope, giraffe, buffalo, & warthogs.  I managed to photo a Fork-Tailed Drongo & and Gray-backed Fiscal.  Saw lots of water & shore birds around a small pond.  It was all just very pleasant & enjoyable.

We had turned around & were heading home.  Marlyn, Michele, George & I with Bachu driving were in the second jeep.  As we came around a sharp corner, Isaac put on his brakes & rapidly started backing up.  Bachu immediately started backing up too.  Suddenly a HUGE elephant came running at the first jeep - he was running pretty fast - it's amazing how fast that big animal can really move.  A car was following the elephant, so effectively had him penned in.  There was no way to turn around on the one lane dirt road, so both jeeps just continued to back as fast as possible.  It was a pretty scary event.  Especially when we found out that this same elephant had turned a car over last month!!!!   Eventually he veered off into the bushes, but it felt like forever!!!  I'm sure Ken, Sue, Marilynn, Tom, & Isaac were counting his nose hairs!  Whew!  That was a bit too close!  Anyway, we headed back to the lodge.  We had to be out of the National Park by 6pm.  Only the National Park rangers are allowed to drive at night.  Mostly so they can be assured that anyone driving at night is a poacher & they can apprehend them!!!  Back at the lodge we enjoyed a lovely dinner and all called it an early night again!
Posted by Pam's Travel Reports! at 1:54 PM No comments:

Pam's Travel Reports!
Love to travel and love to share our adventures with others